skip to main | skip to sidebar

Double Up on Lemony Goodness

So nice to see you again! Admittedly, it's a bit rich to celebrate the anniversary of a blog you hardly update, but 5 years is 5 years all the same - hooray! It's been 5 years since I stopped my food column at the Copenhagen Post for the reasons anybody else who's ever worked for them will easily understand, and started sharing my culinary adventures here. And also so people reading my regular blog wouldn't get sick of all the food pics. Alas, as time has shown, I had naught to worry. :)

So, in light of this joyous occasion, I have two, count 'em two, lemon cake recipes to share with you that will both delight and tickle your tastebuds. There's just something special about lemony sweets, isn't there?

The first lemon cake recipe is somewhat of a Danish joke. Not because it's a bad cake, it's just a cake that most people never make themselves, rather preferring to buy it vacuum packed at the local discount supermarket. And the Danish police are supposed to have a certain weak spot for this very cake, to be enjoyed during breaks with a cup of institutional coffee served in plastic cups. You get the gist. Bit of a shame, really, since the real deal is easy to make, and so delicious and satisfying. 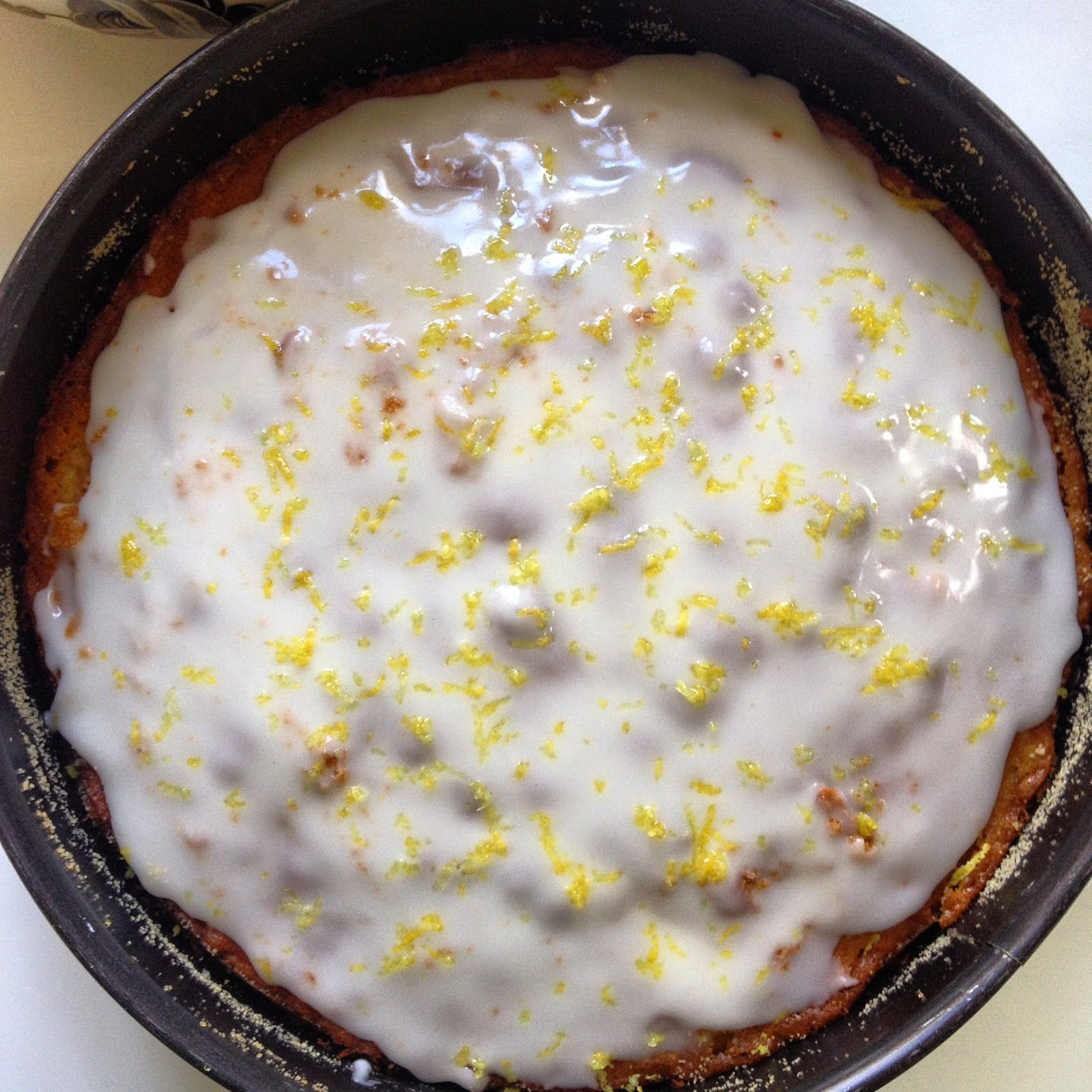 Preheat the oven to 175 C. Whisk the butter and sugar together, preferably with an electric handmixer, adding the marcipan when they're mixed well. Now add the eggs, one at a time. Add the zest of one lemon. Mix the flour and baking powder well in a separate bowl before folding it into the butter/sugar/egg mix.
Grease a round 24 cm. cake pan, and sprinkle with flour or breadcrumbs before pouring in the dough. Smooth the top of the cake before placing it in the middle of the oven for a good 40 minutes bake time. When the cake is done, let it cool completely down before taking it out of the pan and placing it on the dish you'll be serving it on.
For the icing, mix the powdered sugar into the tbsp of lemon juice, a little at a time until you've got a thick, smooth mixture. Smooth over your cake, and sprinkle with the rest of the zest.

If this were to pass as a real Danish citronmåne, as described above, with vacuum wrap, bad coffee and cops, you'd serve the cake by the half. Like a half moon. Whatevs. Just eat the damn thing, and try to share as much of it as possible, or you will eat it all by yourself. 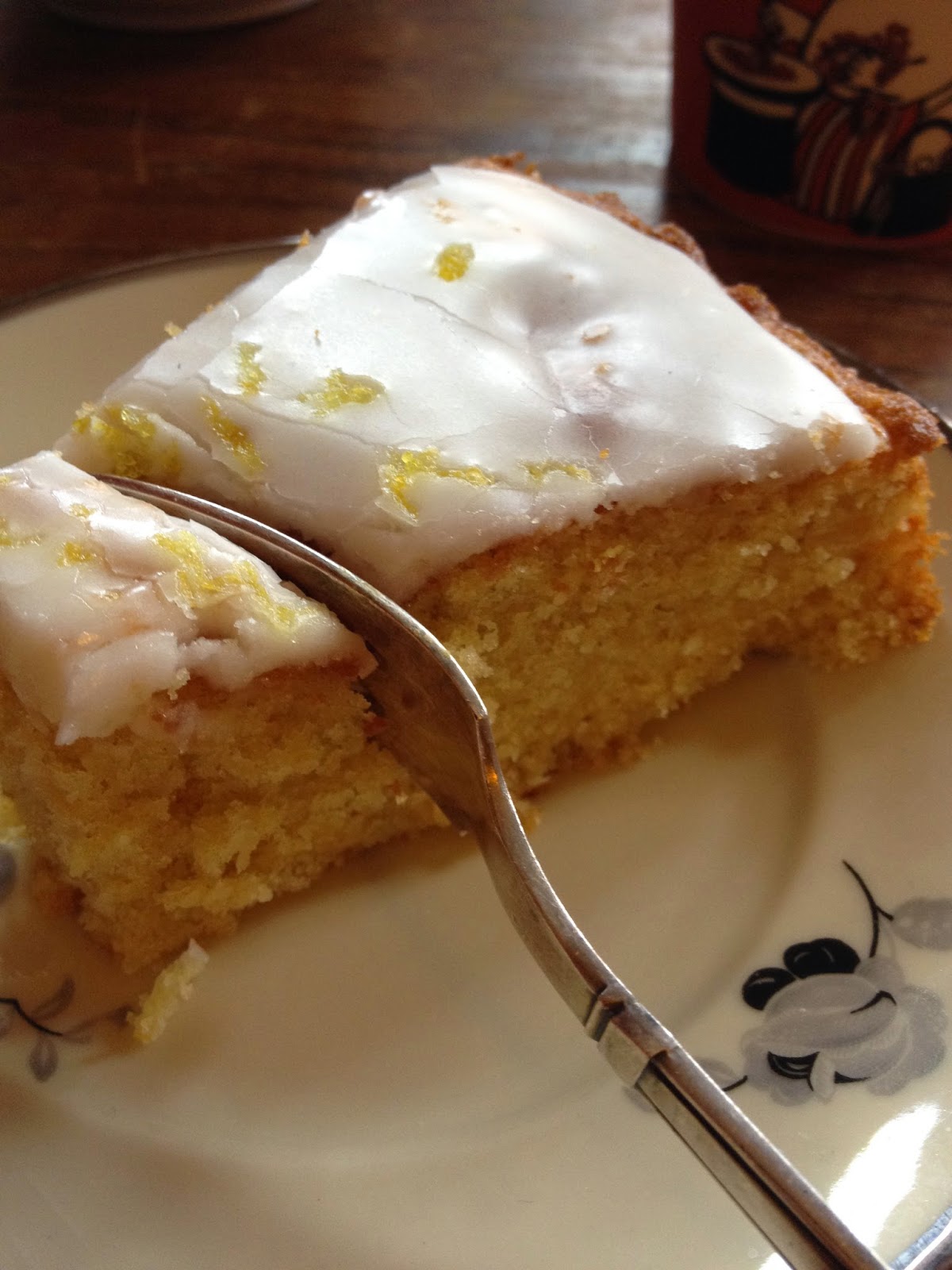 For my next lemon cake trick, I present to you the Swedish version of a mud cake. With lemons instead of chocolate. So not really a mud cake, but with the same gooey denseness going on. Even if you overbake it. Which we did. No matter. It is GOOD. It is TART. It tastes like MOAR. You'll have to forego a pic on this one, we ate it too fast, but you can check out the Swedish recipe for one if you like, and enjoy the readers' own pictures.

Preheat the oven to 150 C. Grease and flour a 20 cm. cake pan. Melt the butter and let cool. Grate and juice the lemon. Mix the egg and sugar together until white, light, and fluffy. Turn the handmixer on low and add the vanilla sugar, the lemon zest and juice. Add the butter and flour, mix well, and pour the mixture into the pan.

That's it. Super easy. Super good. And super tart, so don't be timid, and serve this with a helping of fat, either sour cream or whipped cream.

For people with gluten intolerance, without having tried it, I'm pretty confident that almond flour would do really well with these two recipes, so have at it!
Posted by Jennie at 6:34 PM

Welcome to my kitchen...

I started this blog because I'd been writing a food column in The Copenhagen Post a year's time, and was tired of being poorly payed and unrecognized for my efforts. I'd rather just put it all out there for free, and be paid with the occasional comment. So welcome, to the continuation of my food column, and to my real life kitchen.

Let me feed you!